In the Name of Allah, the Compassionate, the Ever Merciful… 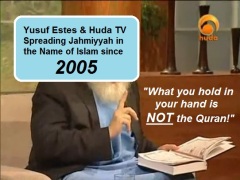 Controversial American preacher and Huda TV star, Yusuf Estes, is caught in the act once again spreading the blasphemy of the Jahmiyyah Cult about the Quran.  This one is especially clear and surprisingly embarrassing for both Yusuf Estes and Huda TV, as the false beliefs they choose to propagate are not even shared by their studio’s own singers!

Here is the text of the question posed to Yusuf Estes, along with his answer:

[Question] Can you give the Quran to a non-Muslim to read?

[Answer] Suppose there’s an Arab Christian, he would like to read the Quran. What do you got to do? Give him a translated version that he can’t read? I’m asking you. How will he know? Can he listen to the Quran?

Let me explain it like this: If you have a dollar bill from the United States in your hand, that is the representation of wealth – gold or silver – that is stored somewhere else. True or false? The bill itself isn’t worth that, it’s not made out of silver or gold. A dollar bill or a hundred dollar bill cost the same to print. This is no difference.  This is ink and paper. What makes it have a difference is what it’s worth when you turn it in. True or false? It represents wealth. So the same way, the mus-haf represents what’s being recited.

Still, we respect it.  Still, we honor it. But we have to understand the Quran itself was only recited by Muhammad, peace be upon him, never written by him. It was written by his followers, and then later on after he was gone, some of them decided, you know, let’s compare what we have, and make sure that we didn’t make errors in our writing. And that’s why they brought those who memorized to sit there and recite, to verify what had been written down, and then destroy everything, starting fresh, just to be sure, from this point forward, we only have what is being recited.

Source: An episode about the Quran from the Huda TV Series, “Misconceptions” (2010). (Youtube/Safeshare)

In this one fatwa, Yusuf Estes and Huda TV propagate the clear kufr (disbelief) of one of the Jahmiyyah sects once again. But what makes it especially embarrassing and disgraceful is that the singer in the beginning of the very same program cheerfully carols his lyrics:

If you ask me what my book is,

That I hold in my hand,

If you ask me what my book is,

Oops! According to Huda TV’s “Imam of America” (may Allah guide him), that should be sung: “It’s-NOT-the-actual-Quran-but-instead-a-written-representation-of-it-while-the-original-is-stored-somewhere-else-like-how-paper-money-only-represents-gold-and-is-not-gold-itself!” A bit wordy, I know, but that’s just the Jahmi ‘aqeedah taught by the “Funny Sheikh” (as he refers to himself).

What a revealing contradiction! Which of the two would you expect to know the correct ‘aqeedah of the Muslims – Huda TV’s big star and “Imam of America” or the Huda studio singers?!

“What you hold in your hand is NOT the Quran” (Jahmiyyah)

There is nothing new about Yusuf Estes spreading the blasphemy of the Jahmiyyah Cult on Huda TV and elsewhere. We have dealt with this in numerous articles, and explained how the beliefs he has spread over the last ten years are not the beliefs of the Muslims, but rather that of the stray sect of disbelievers called the “Laf-thiyyah” Sect, one of the strains of the Jahmiyyah Cult.

Giving a Mus-haf to a Non-Muslim to Read

Unsurprisingly, Yusuf Estes (may Allah guide him) does not withhold from issuing fatwas (religious edicts) whilst being clearly untrained and unqualified to do so. Nor does Huda TV (may Allah correct them) seem to have any shame in providing an international platform for such an ignorant person to speak  in the name of Islamic programming.

Shaykh ‘Abdul-‘Azeez ibn Baaz (may Allah have Mercy on him), late Mufti of Saudi Arabia, was asked, “If a Christian requests a mus-haf from me, should I give it to him or not?” He replied:

You may not give him one, however, you can read the Quran to him, so he could hear it. You could invite him to (the Religion of) Allah and pray for his guidance, based on the Statement of Allah, the Most High, in His Authoritative Book [what means]: ( And if any of the polytheists seek your protection, then grant him protection, so that he could hear the Speech of Allah, then grant him passage safely. ) [9:6] And the statement of His Messenger (may Allah raise his rank and grant him peace): [what means] “Do not travel with the Quran to the land of the enemy, as I fear they could get a hold of it.” [Muslim]

Furthermore, there is no problem in giving him some books of tafseer or hadeeth, if it is hoped that he might benefit from them. He may also be given some translations of the meanings of the Noble Quran.

Yusuf Estes mistakenly assumes that the memorization was the most important element in the compilation of the first complete mus-haf, while that was simply not the case at all. Additionally, the Prophet (may Allah raise his rank) forbade the Companions from travelling with the mus-haf to the lands of the enemies, as is collected in Saheeh Muslim. This further proves that the Quran had clearly been recorded in written form in the lifetime of the Prophet (may Allah raise his rank and grant him peace), as he began to teach the Companions about the special rulings that apply to the written Quran!

By Allah’s Grace, we have also sufficiently dealt with the blasphemy of this filthy form of tash-beeh, wherein Yusuf Estes likens the Speech of Allah to paper money.

Review this and this for examples.

"As for the Quran that is recited, written in the mus-hafs, written down and recorded (therein), understood in the hearts, then it is the Speech of Allah the Most High, not something created."
Loading Comments...
%d bloggers like this: