In the Name of Allah, the Most Gracious, the Ever Merciful…

Breaking months of (public) silence regarding his grave errors and their clarifications, controversial American preacher Yusuf Estes defended his beliefs and responded to his critics at the Islamic Center of Detroit on Saturday, May 18, 2013. We have reported this incident (here), including important commentary on:

Now, since his private slander has leaked and he has been caught publicly in a string of deceitful lies, Yusuf Estes has decided to let some more of his personal frustration out. The following comments from Yusuf Estes’ personal YouTube account appeared on June 23, 2013: 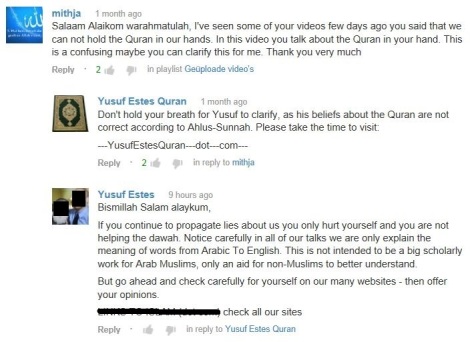 LIE #1 – The Points Against Him are Lies

Yusuf Estes mentions that the points of criticism against him are lies. The points of criticism against him are merely based on his exact words, taken directly from his public lectures. The writings against his severe errors do not request anyone to trust the critic, rather every claim is backed up by precise quotes from the mouth of Yusuf Estes himself, most of which are from openly available videos on YouTube and other public platforms. Everything we say is 100% verifiable and accurate, by the Permission of Allah. To refer to this work as “lies” is a lie itself.

Yusuf Estes and his supporters who claim he has been lied upon are welcome to comb through this website diligently and try to find ONE SINGLE lie that has been said about him. They are also welcome to repent earnestly to Allah for slandering honest Muslims trying to defend the Religion of Islam:

“And whoever errs or commits a sin, and thereafter accuses an innocent person of it surely takes on the burden of slander and obvious sin.” [4:112]

“And whoever harms the believing men and women with things (accusations) they are innocent of surely takes on the burden of slander and obvious sin.” [33:58]

He tries to explain away his revival of ancient Jahmiyyah innovation by claiming he was just explaining the meanings of words from Arabic to English. Explaining the linguistic meaning of the word “Quran” is one thing, and negating that what is in the mushaf is actually the Quran is another – it is in reality the disbelief of the Jahmiyyah Cult. This cover-up for his misguided teachings has recently been exposed in another one of our articles.

The next comment actually provides a real example of the kind of etymology (explanation of words) he is talking about:

Here, you see how his so-called “etymology” leads him to deny that a Muslim can hold the Quran in his hand. There is total consensus among Ahlus-Sunnah that the mus-haf is the Quran. If you hold a mushaf up in front of a four-year-old and ask him what it is, he will say: Quran. Sadly, according to the rhetoric of Yusuf Estes, it is NOT the Quran, but instead a book that contains the recitation, or a “representation” of the Quran (as he explains in other occasions). This is the belief of the Jahmiyyah, not the Muslims, as explained in many articles on this website (example), and as explained in detail in this informative e-book.

LIE #3 – No Claim of Scholarship

Here, Yusuf Estes says that he never claims to be a scholar. This is a lie. He knows full well that he has explicitly referred to himself as a scholar (example) and openly endorsed introductions of himself where he is called a scholar (example). He has even smiled and sat silently on Huda TV as they called him “the Imam of America” on the air!

Also read: The Real-Deal Scholar Who Doesn’t Claim to be a Scholar

And those who continue to follow Yusuf Estes would do well to ask about the identities of the “real scholars” who help Yusuf Estes put together his programs and advise him not to reply to his critics. 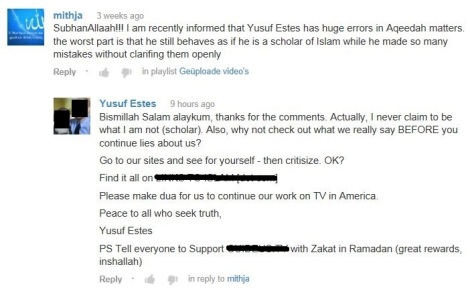 It is important for us to be reminded that lying is a sign of the hypocrites:

“The signs of a hypocrite are three: When he speaks he lies, when he promises he breaks (his promise), and when he is trusted (with something) he betrays (the trust).” (al-Bukhari & Muslim)

And the Prophet (may Allah raise his rank and grant him peace) also said:

“Be warned of lying, since lying leads to wickedness, and wickedness leads to the Fire. A man will go on lying, seeking opportunities to lie, until he is written with Allah as a (full-blown) liar.” (al-Bukhari & Muslim)

These serious and scary hadeeths refer to normal everyday lies. There are a number of factors that would intensify the magnitude of the crime of lying many times over, like:

In fact, Allah describes the disbelievers and their method of lying in arguments to cover up the truth:

“And the people who have disbelieved dispute with falsehood in order to refute the truth” [18:56]

We ask Allah to rid us of all likenesses to the disbelievers, and grant us all success in turning back to Him alone with sincere repentance from the worst of our ill deeds.

One response to “Yusuf Estes Responds: Smokescreen of Lies in Youtube Comments”

"As for the Quran that is recited, written in the mus-hafs, written down and recorded (therein), understood in the hearts, then it is the Speech of Allah the Most High, not something created."
%d bloggers like this: